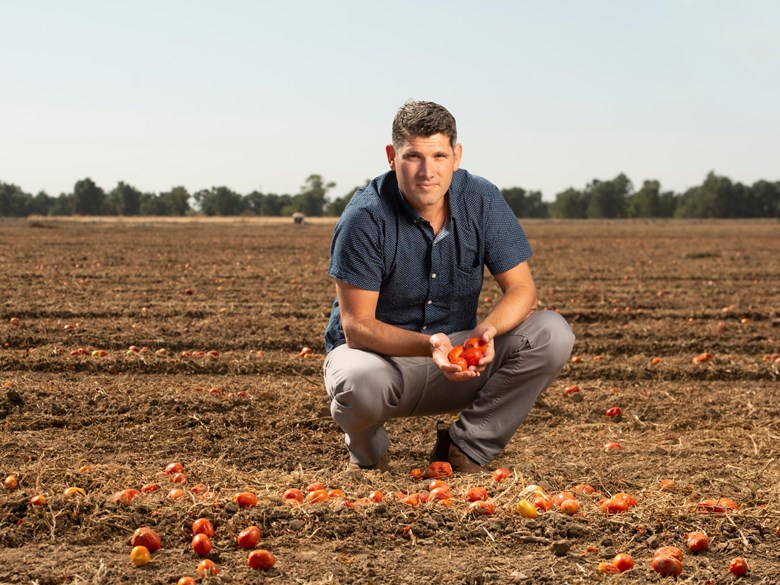 Assistant Professor Ned Spang holds pasting tomatoes that have been left in a field after mechanical harvest. Mechanical harvesting can reduce food waste and typically leaves only 1 to 2 percent of yield behind.

It isn’t often that we think a lot about food loss and waste. For example, have you ever thought about this: food waste and loss amounts to $1 trillion in economic costs. And how about these startling facts: 20 percent of land, seventy percent of water withdrawals, and thirty percent of energy are embedded in the food system.

Amy Quinton, who writes about science and agricultural research, has created a new podcast called Unfold. She co-hosts and co-produces the podcast with Alexa Renee. The first season of Unfold looks at how to sustainably feed an expected 10 billion people worldwide by 2050. Quinton will describe the goals behind doing a podcast on food waste and food loss. She will be joined by Ned Spang, an Assistant Professor in the Food Science and Technology Department at UC Davis.

Spang’s research focuses on the linked relationship between food, water and energy and finding efficiencies in those systems. He recently published an in-depth review of the causes of food loss and waste globally, as well as the environmental impact of food losses on farms.

Onsite (a.k.a. decentralized) water reuse can reduce overall potable water demand and aid in meeting water reduction goals. In spite of clear benefits, onsite non-potable water systems (ONWS), specifically non-blackwater commercial systems, face many challenges that are preventing growth and expansion in California. This study utilized a technical advisory committee and a survey to identify the most significant challenges facing onsite water reuse systems, how these challenges affect ONWS stakeholders, and potential solutions at the state level. The given methods found that the most prevalent challenges hindering the growth of ONWS appeared to be the absence of a local regulatory program, system cost, poor access to training for regulators, and limited public education about alternate water sources. Survey results revealed several possible drivers for the existence of these challenges including that informational and training resources are not adequately disseminated to target groups. The study concluded that the creation of trainings for regulators, the development of an organization dedicated to onsite systems, expanded technology certifications, policy changes, and highlighting existing systems might help overcome the challenges hindering growth and allow for greater expansion of onsite non-potable water systems throughout California.

The water–energy nexus flowed through the presentations and conversations at the annual 2018 UC Davis Energy Affiliates Forum held April 19 at the Activities and Recreation Center on the UC Davis campus. Nearly 150 organizers, presenters, and participants were registered for the all-day event featuring keynote speaker Ron Nichols of Southern California Edison (SCE).

The common theme throughout the proceedings was the need for integrated solutions to meet the challenges posed by California’s rapid switch to renewable energy and statewide goals for a carbon neutral future. As the keynote and others emphasized, reliability is a critical challenge for our emerging energy systems, and integrated solutions — including demand management, load shifting, distributed assets, and energy portfolio diversification — must provide both redundancy and flexibility to meet these challenges head on.

CWEE Director Professor Frank Loge spoke both in the morning and at the afternoon breakout session. Prof Loge’s remarks centered on the work of the Center for Water–Energy Efficiency, pronounced affectionately as “swee” by students and staff alike, and the goals of the affiliates program.

Prof. Loge cited the study as evidence that water and energy utilities should work together on policy changes that would allow energy efficiency funds to be used toward water conservation. Current California Public Utility Commission (CPUC) policies as well as the mismatch between energy and water service areas either prohibits or creates barriers to such an approach.

Prof. Loge also covered the beginning steps of a multi-year California Energy Commission (CEC)-funded project in partnership with the Moulton Niguel Water District and Helio Energy Solutions focused on energy demand management and load shifting within a water supply system. The work is driven by the mismatch between the traditional electricity supply-demand curve (and pricing) and the new reality of dramatically increasing and variable renewable energy supplies.

From a water-energy nexus perspective, the mismatch is reflected in the fact that water utilities are designed and incentivized to avoid operating pumps during the day when energy is seasonally in oversupply and being sold regionally at a loss.

Prof. Loge invited active participation from the affiliates in the afternoon session which sparked lively debate about the feasibility of implementing time-of-use or other specialized water rates and the need for collaboration around a common water-energy intensity calculation methodology to facilitate the flow of carbon cap and trade funds to the water utility sector. Affiliates raised concerns about barriers to innovative partnering between energy and water utilities like existing CPUC policies that don’t grant portfolio credits for collaborative efficiency and conservation programs.

Another CEC project on CWEE’s plate focuses on policy barriers to commercial use of recycled water. CWEE is working with Jackson Family Wines to perform on-site water reuse as part of winemaking process operations. Prof. Loge pointed out that while the requirements to recycle domestic wastewater are very clear, for greywater reuse and water reuse in the commercial and other sectors, “policy is the barrier to implementation.”

The driving force behind much of the work discussed over the course of the full day forum was outlined by Dave Peck, advisor to President Michael Picker of the CPUC: the California Renewable Portfolio Standard has set a 50% renewable energy retail sales goal by 2030.

Southern California Gas regional vice president of external affairs and environmental strategy George Minter emphasized the need to decarbonize our gas supply to comply with state mandates to capture 40 percent of methane by 2030. Minter expressed confidence in strategies such as capturing biomethane from waste streams and cited UC Davis studies that confirmed the feasibility of this approach.

For the midday poster session, newly hired Research Engineer, Robert Good, reported a high level of interest and engagement around the posters reflecting the Center’s work:

CWEE is one of three centers that make up the Energy and Efficiency Institute, along with the Western Cooling Efficiency Center and the California Lighting Technology Center.